1. The Production of Wealth 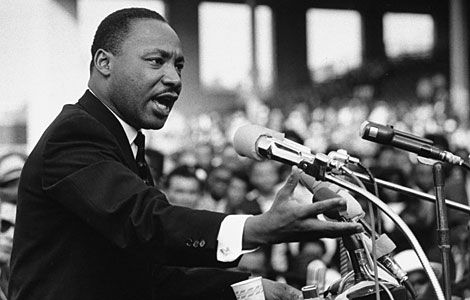 I am sure that each of you would want to go beyond the superficial social analyst who looks merely at effects and does not grapple with underlying causes. True compassion is more than flinging a coin to a beggar; it understands that an edifice which produces beggars needs restructuring.

—Martin Luther King Jr. (1929–1968)
The late publisher Alfred A. Knopf once quipped, “An economist is a man who states the obvious in terms of the incomprehensible.” But the subject of economics doesn’t have to be incomprehensible; since all economic principles are grounded in human behavior, you really need only your common sense to understand them. Indeed, if we’re ever to create a world where we can all enjoy materially fulfilling and dignified lives while also living in harmony with nature, it’s vital that we properly understand economics, because the science of economics underlies the study of social welfare.

Let’s begin with an initial overview of economics that may at first seem abstract, but which has relevant and practical applications in subsequent chapters. If a concept isn’t clear to you at first, it will become clearer upon further reading, since we’ll look at our central thesis from different angles throughout this book. Our main interest here is the basics; if you’re interested in some of the more technical aspects, you may also wish to consult the endnotes and appendix.

In this book, we’ll define economic wealth as all goods and services that can be perceived with our senses, that are produced with human effort or the use of machinery, that directly satisfy human desires, and that have an exchange value. This particular definition is important because a conventional understanding of wealth isn’t precise enough for our purposes. One key example: Under our definition, money isn’t economic wealth, since it can’t satisfy human desire directly, but only indirectly when we exchange it for something else (a person stranded on a deserted island quickly realizes that money itself isn’t real wealth). Nature’s gifts such as fresh air, water, and land are also not economic wealth, because no human being has made them. Under our definition, human-made goods and services are economic wealth because goods and services can add value to our lives. So, when we talk about how wealth is created, it’s important to keep in mind our specific definition of economic wealth; whenever I use the term wealth, I mean economic wealth as defined here.[1]

On the most foundational level, wealth is created from nature, human labor, and tools. The so-called classical economists of the eighteenth and nineteenth centuries referred to these three elements as the three factors of production: land, labor, and capital. The term land refers to all gifts of nature; the term labor to human effort; and the term capital to capital goods such as tools and machinery. 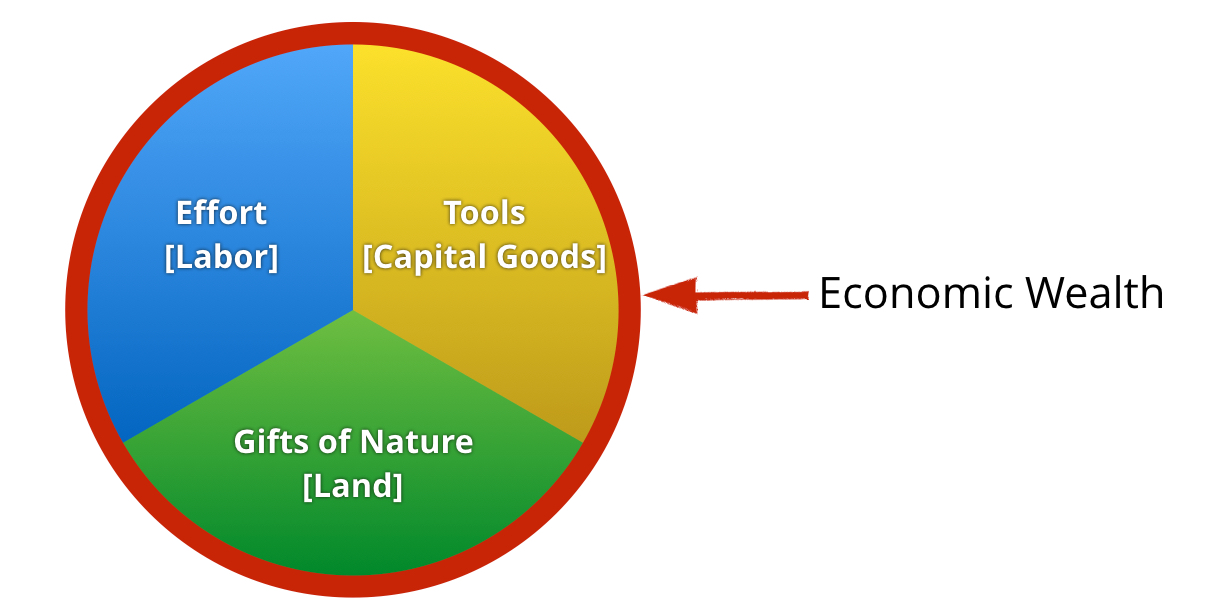 ‍Under this definition, land refers not simply to parcels of land, but to anything freely provided by nature, including the air, minerals, trees, and water, and even the electromagnetic spectrum.[2]

The term labor is pretty straightforward and signifies all human exertion, both mental and physical, aimed toward the production of wealth.

The term capital means all previously created wealth that’s put toward the creation of new wealth. The word capital here doesn’t mean money, but rather refers to capital goods: human-made objects such as machines or buildings that assist in the production of new wealth. Over time, we generally produce more wealth than we consume or destroy, and so our societies have a surplus of capital goods; everywhere we look, we see factories, office buildings, computers, trucks, and railroads, all standing by and ready to assist humanity in the production of new wealth.

‍
Broadly speaking, there are only two ways human beings can make an income: They can either make an income by contributing to society, or they can extract an income from society.[3] People can contribute to society by providing valuable goods and services: When human beings add value to the wealth production process through their labor, that added value can be classified as a wage (for example, when a mechanic buys a car, repairs it, and then sells it for more money afterward, that sales differential becomes her wage); and when capital goods add value to the wealth production process, that added value is what economists call a capital return (for example, the value added by the mechanic’s use of time-saving power tools is a return on the mechanic’s capital—her power tools).[4]

The only other way people can make an income is by receiving what economists call economic rent. They do this not by adding wealth to society, but by extracting an income from society without providing wealth of corresponding value. For example, when people make money from selling land, they extract economic rent from society since they didn’t contribute any human-made wealth to society.[5]

The problem with rent extraction is that the more rent people extract from society, the fewer resources remain to pay people for their goods and services. Because many people extract economic rent from society on an ongoing basis, the people who add value to society—employees, small business owners, independent contractors, and so forth—are left with a much smaller share of the economic pie from which to draw an income.

We’ll return to these concepts in different ways throughout the following chapters. The important thing to remember is that wealth production utilizes nature’s gifts, human labor, and tools, and that we can either get paid for providing goods and services that add value to society, or simply extract money without creating any corresponding value for society. Now that we’ve looked at and clarified these economic principles, the stage is set for us to explore how land attains its value.
Previous
Contents
Next
Buy a signed copy