Permanent peace can only be established when men and nations have realized that natural resources should be a common heritage, and used for the good of all mankind. 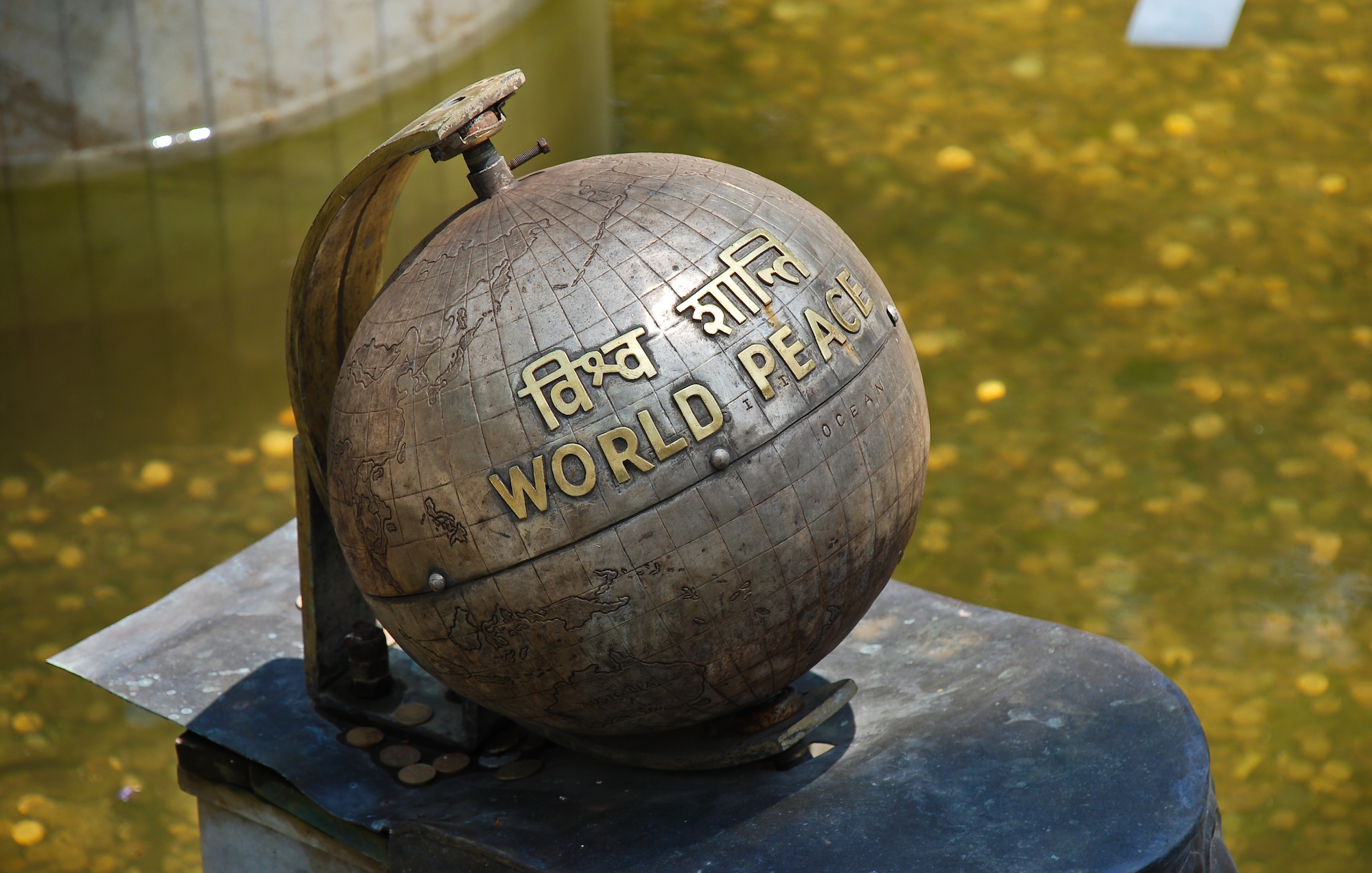 Swayambhunath world peace monument in Kathmandu, Nepal‍.
There are, essentially, only three ways we can obtain wealth: We can create wealth, receive it from someone else, or take it away from someone else. In economics, the term rent seeking signifies a person’s attempt to take away wealth, which the person can accomplish by manipulating the social and political environment in order to redirect the flow of income. Nobel laureate economist Joseph Stiglitz defined rent seeking as “using political and economic power to get a larger share of the national pie, rather than to grow the national pie.”[78] In a sense, rent seeking is the seeking of privileged access to community wealth, which, of course, also includes the rent from land. Rent seeking is endemic to our civilization: It leads to a dysfunctional society based on exploitation and results in the corrosion of the social fabric. Individual exploitation leads to wealth inequality, cultural degeneration, and crime; ecological exploitation causes species extinction and habitat destruction; national exploitation fosters global insecurity and war. Nations, for example, engage in rent seeking whenever they covet resources abroad instead of using their own resources more efficiently and sustainably at home. Nations actively engaged in rent seeking are usually participating in an age-old practice known as land grabbing.

As a city may fail to make efficient use of its urban areas and instead expand into its surroundings in search of cheap land, a nation may choose to engage in rent seeking by acquiring ownership or control of foreign resources it considers of strategic interest. The reason that rent seeking on a national level works similarly to urban sprawl is because in both cases we are underutilizing preexisting resources: If a city grows, it either needs to use its land more efficiently by permitting the construction of additional and taller buildings within city boundaries, or sprawl onto neighboring land. Sprawling requires the city to invest additional capital—roads and other transportation infrastructures, as well as electric and sewer lines, for example. However, most cities don’t regain their infrastructure investments by recouping the resulting rise in land values, so existing taxpayers are forced to foot the bill. Similarly, a nation engaged in the acquisition of foreign resources requires an expensive and sophisticated infrastructure of military, industrial, and commercial enterprises, which are, ultimately, financed by taxpayers at home.[79]

Any nation that seeks the acquisition of foreign resources is engaged in rent seeking. Maintaining an active empire infrastructure is a costly endeavor for any nation, and the gains from foreign resources generally only benefit a few, leading to a rise in domestic wealth inequality. Nations then fail to keep their home economies in good shape while they simultaneously overextend themselves abroad in ways that, given enough time, precipitate their eventual demise.

This process of rent seeking on a national level has expressed itself throughout human history: Nazi Germany’s quest for Lebensraum, Europe’s colonialism, America’s manifest destiny as well as its waging of foreign wars, and China’s acquisition of land in Africa and South America are all examples of rent seeking on a national level in one form or another. Rent-seeking behavior has also occurred on an individual level when landless peasants fleeing the high rents and poverty in Europe settled on other continents; new landlords on these continents couldn’t charge as much rent because there was a vast expanse of quality land that settlers could own rent-free. The American Dream itself was only made possible because of the availability of cheap land—land that was taken from Native Americans.

It’s also possible to counteract the tendency toward rent seeking on a global scale. Fred Foldvary conceives of a so-called geo-confederacy, a conflict mediation tool for nations engaged in territorial disputes based on historical, cultural, or political feuds. Under his proposal, land contributions are levied upon territorially disputed areas by an international conflict mediation agency set up particularly for that purpose (a confederacy). Land contributions are payable to the confederacy by the various nations that occupy the disputed territories in exact proportion to the land values of those territories. The confederacy then redistributes these funds back to the occupying nations as well as to the affected population within those territorially disputed areas. In this way, occupation over a disputed area comes with a price—a price that more accurately reflects the actual economic gains sought by the occupying nations, as well as the actual economic costs that are being inflicted upon the people in the disputed territories. Using one of the most historically difficult conflicts as an example—the Israeli-Palestinian conflict—Foldvary shares with us how a geo-confederacy might look:[80]‍
Under a geo-confederacy, the governments of Israel and Palestine would own land at a price. At present, land held by either side now has no carrying cost. But if each had to pay dearly for each acre it holds, perhaps the price of holding it would induce a less intense desire to maximize land area and land value. The [confederacy] could, as an example, distribute 30 percent of the rent to the governments of the constituent states on the basis of their population. Another 30 percent of the rents could be paid equally to the two states, each getting 15 percent. This would act as a counterweight to a population war. The confederacy would retain the remaining land rent for its administration and the retirement of any debts or for agreed-on compensation for losses.

For the Israelis to accept a settlement, they need to regard it not as yielding territory, but changing its governance; not as a withdrawal, but an agreement to share sovereignty; not as the establishment of a hostile neighboring state, but as the preservation of Jewish autonomy within a common government over which they will have significant control.

The Palestinians are under pressure for a settlement. The economy of the Palestinian Authority has been devastated and cannot long endure the restrictions imposed by Israel in response to the continuing violence. But Palestinians, too, will nevertheless resist a settlement unless they see it as a just plan. Obtaining their share of the rent from all the land in Israel and Palestine as compensation for not possessing it would go a long way towards the perception of economic justice.

The ultimate source of resentment and hatred is the feeling that another is enjoying a privilege, an unfair advantage, or a position of dominance. When all are politically equal, such feelings would subside and then and only then would cooperation and friendship be possible. The political struggle for land would be transformed into an economic marketplace where those who use the land compensate the others for their use of their common homeland.
MEDIA 14-1: PEACE THROUGH CONFEDERAL DEMOCRACY AND ECONOMIC JUSTICE
In this paper, economist Fred Foldvary offers a proposal by which the rent of disputed territories are collected for public benefit as a way to accurately reflect the real cost of occupation. http://unitism.co/globalconfederacy

W‍ill we ever see such a resolution of the Israeli-Palestinian conflict? Ultimately, it depends upon the degree to which we are willing to sacrifice our own short-term self-interest on behalf of the greater good, which includes our long-term self-interest. Peace has a price, and that price is the unearned income we receive from land. As long as we are unwilling to share the value of land with one another, it’s likely that we may not create enduring peace, no matter how hard we may try otherwise. But if we find within ourselves the willingness to share the gifts of nature with one another, we may stand a reasonable chance of finally attaining a lasting peace on Earth.

The price of peace is high because the changes we need to make are staggering; yet the price ultimately pales in comparison to the cost that all of us will have to bear if we refuse to share the Earth with one another. So let’s resolve to pay the price of peace so that we may one day leave a lasting positive legacy for our children and our children’s children.
Previous
Contents
Next