There can be no fairness or justice in a society in which some live in homelessness, or in the shadow of that risk, while others cannot even imagine it. 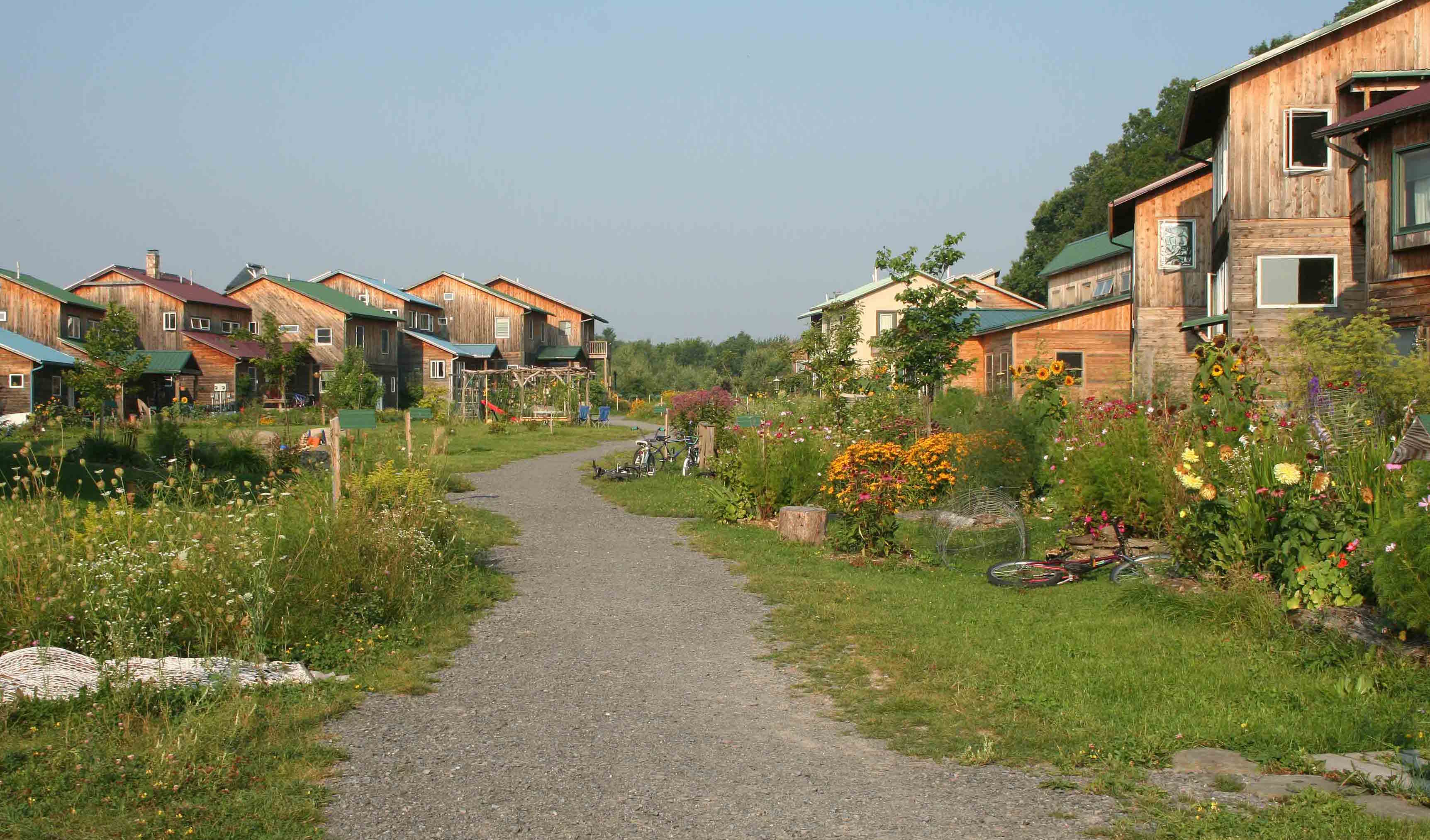 Ithaca Ecovillage
We live in a world of abundance yet simultaneous poverty. We can no longer blame famine, war, or lack of technological progress for the poverty that remains an inextricable part of human experience. Nor can we blame a debt-based monetary system alone for our state of affairs. Although money buys power, it can only do so, by and large, in an economic system in which wealth cannot easily be created due to the ownership and hoarding of land. Human beings need land even more so than they need money; the monopoly of land—not the monopoly of money—is the primary driver of poverty and inequality.[60] Once we understand that the issue is lack of affordable access to land, and therefore to community, we understand why the value of land has to be shared.

Economists worldwide have already laid much of the scientific groundwork for the effectiveness and validity of community land contributions. People unfamiliar with land contributions often wonder if these contributions will raise the cost of housing. However, as we shall see in this chapter, land actually becomes more affordable because land will no longer be hoarded. And since revenues from land contributions will diminish or even eliminate the need for conventional taxes, goods and services will become significantly more affordable. The end result is that homeowners are likely to incur net savings due to diminished or eliminated taxes and considerably lower costs of living.

Our current laws and practices don’t support the dream of affordable housing for the average person. Meanwhile, homeowners with expensive mortgages are burdened by their liabilities; our current system doesn’t easily allow them to sell their homes and rent instead. Flawed economic policies meant to encourage homeownership—and thereby land ownership—are rotten at their core because they’re built on the assumption that land ought to be owned and profited from. As a result, such policies gear us to consider short-term self-interest at the expense of common interests, and therefore at the expense of our own long-term self-interest.

One way for communities to create affordable housing is for local communities to adopt land-use rights. To accomplish a transition toward such a model, either local governments or community land trusts would provide financing to homebuyers, who would then make land contributions on their properties in perpetuity. As a result, communities would get reimbursed for the goods and services they provide to homeowners, while property buyers would primarily become home buyers, not land buyers. This way, the price of real estate can potentially decrease anywhere from 10 to 70 percent, depending on the conditions of the local real-estate market, and everyone wins.

Let’s use a practical example: If a property sells for $250,000 but has a house on it that’s valued at $100,000, we know that the property’s land (or location) value is $150,000. Accordingly, a homebuyer of a $250,000 property pays a premium of $150,000 just for the privilege of living in a certain community. That premium, however, doesn’t flow into the pockets of the community in which this property is located: The previous owners as well as the financial institutions that have provided financing along the way have pocketed this premium instead.[62]

Let’s take our example a bit further: Two people, John and Susan, each decide to buy a condominium in that location for $250,000. For the sake of simplicity, let’s assume both John and Susan make a down payment of $50,000, or 20 percent, toward the property. To pay for the $200,000 remainder, John opts for a thirty-year mortgage at an interest rate of 5 percent, while Susan opts for a land-use right. Her local community, in order to promote affordable housing, provides Susan with $120,000 in cash for the property’s location value as well as a thirty-year mortgage at an interest rate of 5 percent for the remainder of $80,000 in exchange for issuing Susan a land-use right.[63]

Let’s take a look at the money flow for the next ten years. Whenever land is bought and sold, three stakeholders automatically vie for a cut from the revenue that can be had from land: the community, the property owner, and the institutions that finance property ownership. When land increases in value, these increases are always distributed among those three stakeholders, depending upon how the value of land is divided.

Assuming an average land-value growth rate of 2 percent per year and a general interest rate of 3 percent, a $250,000 condominium with no land-use right might cost $283,000 in ten years. A land-use right property, however, will still only be priced at $149,000, even after ten years. The advantages to future homebuyers immediately become apparent: With real-estate prices once again affordable, new homeowners can put their money to other uses instead. Meanwhile, land contributions for this property will have increased from $400 per month to about $478 per month (community land contributions generally tend to increase over time the more a city grows).[65]

TABLE 11-1: MONTHLY COST OF LIVING COMPARISON FOR THE TENTH YEAR

In John’s case the bank will take the lion’s share of the land value via mortgage interest payments. With land-use rights, meanwhile, the community will be much better off: The revenue collected on behalf of the community during those ten years comes to about $53,000, more than twice of $25,000, which is what the community would have otherwise collected in property taxes (see Table 11-2). 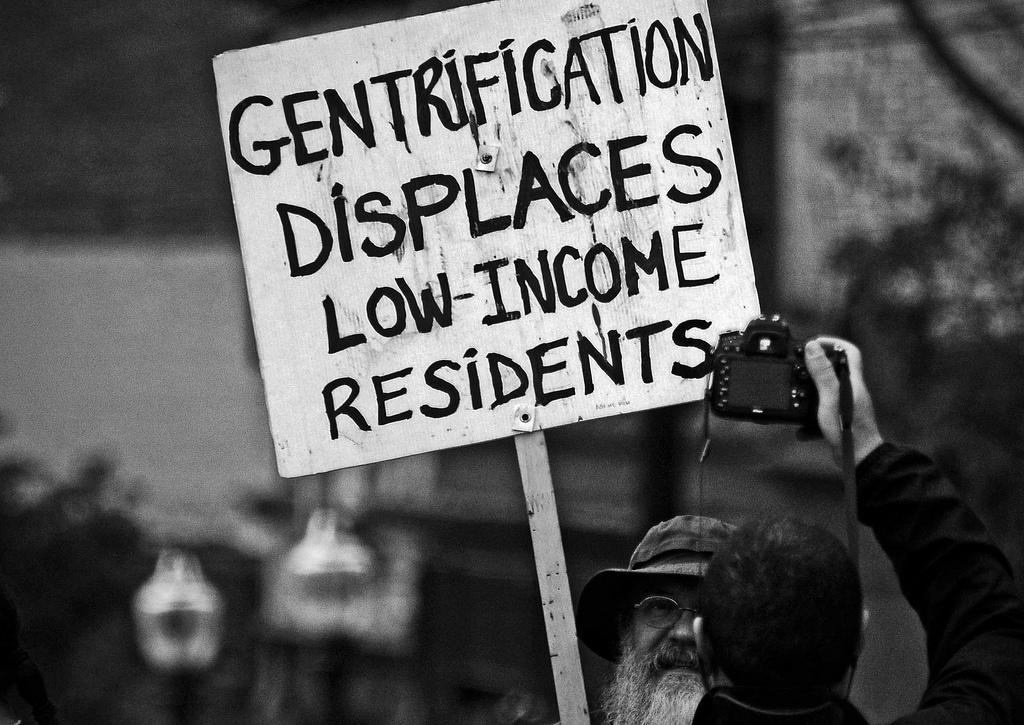 Photo credit
In order for our land-contribution model to be complete, we have to consider two more aspects in our affordable-housing discussion. First, we have to minimize the inequality between tenants and landowners, and second, we have to provide the landless—the homeless—with guaranteed access to land.

Currently, property owners can profit from land while tenants cannot. Because tenants aren’t able to profit from land, they usually end up being gentrified out when rents increase. Unfortunately, in our current economic model there are few things communities can do short of implementing rent control to prevent rents from increasing; higher rents are a natural byproduct of increased affluence for a given area. Because this affluence is only pocketed by property owners and financial institutions and not shared with all residents, rent control often seems like the least bad option in the fight against gentrification. But rent control comes with a host of negative side effects, including a shortage of housing and lower-quality housing, and doesn’t serve the community in the long run.[66]

What’s required is an entirely new mechanism by which higher rents are shared with all residents—property owners and tenants alike. One effective way to do this is through the issuance of a partial Universal Basic Income to all residents, financed entirely from community land contributions. A Universal Basic Income, only when exclusively derived from community land contributions, has the effect of preventing gentrification: When tenants receive a Universal Basic Income, they’re able to afford the higher rents, which they pay to their landlords, who in turn have to pay more money to their local community and provide better services to their tenants. The community, in turn, then shares that added revenue with all community members—and everyone wins.

Having one’s own home can tremendously ease one’s mind in a way that few other things in life can; the homeless are often painfully aware of this reality because they lack that psychological security. While some people tend to believe that the homeless are either lazy or mentally incapable of earning enough money to afford a place to live, few people consider the principle that land has to be shared with all human beings—regardless of whether a person contributes to society or not. This is because no human being has made land; therefore no human being has a justifiable right to marginalize another person from land. Furthermore, all of us need land, just like we need air to breathe.

Since everyone has a basic right to land, it’s society’s duty to provide a minimum standard of free land access to all its members. It can do this for property owners, and tenants by providing them with a Universal Basic Income; the homeless, however, should also be given the option of free public housing (the cost of which can be deducted from their Universal Basic Income share) so that they can have accommodations without living in fear of being evicted. To provide the homeless with free housing also makes sense on a financial basis, since the cost of providing housing for the homeless often tends to be significantly less than the actual welfare costs and societal burdens that are created by homelessness.[67] 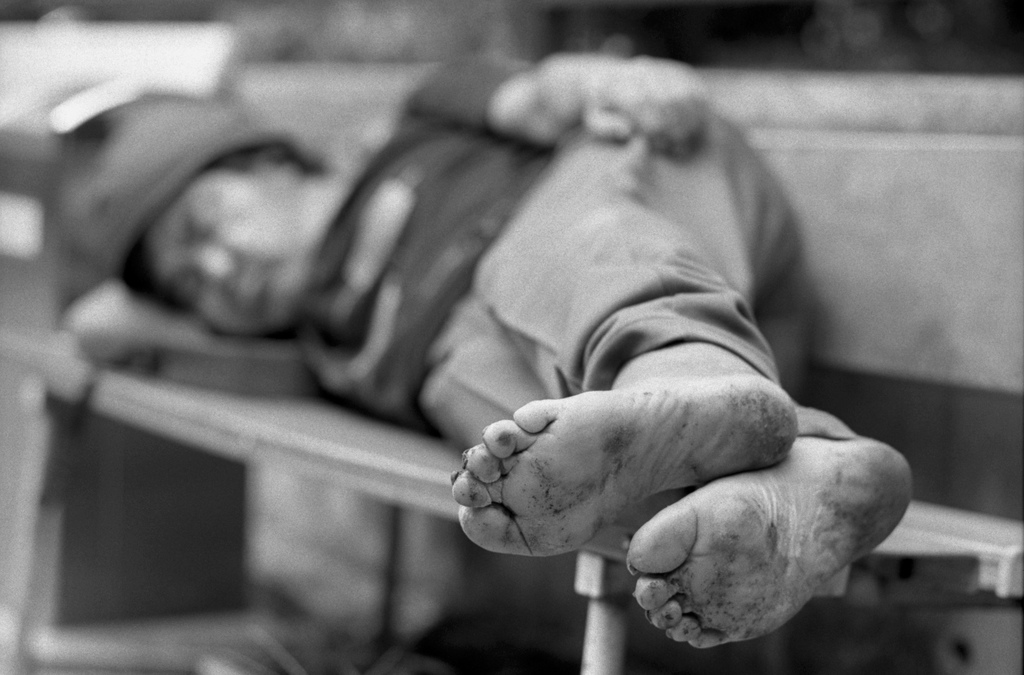 Photo credit
Land is a universal human right. Consider how important it is for the human mind to have a ground to call its own! But in order for everyone to have their own ground, the value of land has to be shared, and housing has to be provided to those who live on the margins.

Land belongs to the people, yet the homeless are not only homeless—they are landless. Their poverty is less a reflection of their inability to sufficiently provide for themselves in a predatory economic system, and much more a reflection of our collective ignorance. Once we realize that everyone has a right to land—and therefore, to shelter—and once we realize how we commoditize this right to the highest bidder, it becomes apparent how we each are complicit in each other’s poverty. It is therefore up to all of us to do our part in alleviating poverty and creating, in the words of Charles Eisenstein, “the more beautiful world our hearts know is possible.”
Previous
Contents
Next